My son, the Godsend, Part 4

After receiving the call that my son was willing to have contact with me, the agency suggested we exchange letters and pictures before meeting in person. In my letter, I expressed my regret and sorrow, offered my love and asked him to forgive me. Jim’s letter expressed his feeling honestly, stressing the commitment his family had made to him and questioning why I had waited so long to search for him.  As you can imagine, we were both in great turmoil, as we made plans to meet in person.
I went to my home town of Bellingham and rented a car to drive to meet him in Everett, about an hour away.  He chose a restaurant for our first meeting and I was grateful for this because I felt I was less likely to break down in public.
Then a stunning thing happened:  As I was about a half hour away from the  designated meeting spot, I saw a huge board falling off of a truck  in front of me, heading toward me at great speed.  For just a moment, I thought I was about to be decapitated, but at the last minute, the board veered and sliced through my tire, destroying it.  I managed to get off on the shoulder of the road and broke down in sobs as I realized I was going to miss the most important meeting of my life.  This was in 1999 before I had a cell phone, so I had no way to contact Jim.  The thought that I just wouldn’t show up and he would have no way to know what happened, was unbearable.  I got out of the car and stared hopefully at each passing car, but no one paid the slightest attention to me.  Finally, I decided my only option was to hitch hike!  I put out my thumb, but still people went speeding by without the least bit of concern for this obviously stranded middle aged woman.  Finally, a car pulled over and a young woman with two little ones in her back seat asked if she could help me.  I was hysterical at this point, crying loudly, and I told her what had happened and why it was so important for me to get to Everett.  She calmly said she would take me there.  As we drove, I thanked her over and over again and told her I would even be a little early, because I had allowed extra time to buy a gift for the grandson I was about to meet for the first time.  Though the shopping time had evaporated, I would  be on time to meet my son.  When we pulled up into the restaurant lot, this wonderful woman told me she had just been to the toy store to buy toys for her children and she opened her trunk and told me to help myself to anything I wanted! Her trunk was full of all sorts of toys, so I chose a gift, for which she refused payment. Unfortunately, I was so excited and overwhelmed that I forgot to get her contact information, so I have never been able to properly thank her for her kindness.
Since I arrived a few minutes early, I went into the convenience store near the restaurant to freshen up, and there, standing right in front of me was my son, my unmistakable son, well over six feet, like most of the men in my father’s family, and unmistakably a Borman!  He recognized me from my photos and extended his arms, taking me into a huge, warm, loving hug... reunited at last!
to be continued....

Posted by Unknown at 4:21 PM No comments: 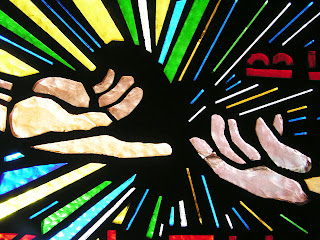 My Son, the Godsend, part 3

Searching for my child:  A timeline

1983:  When Jim was 22 and I was 42 (married and the mother of five), I wrote to the agency that had handled the placement,  asking if they could give me any information about my son’s adoption.  I also admitted to having blanked much of the details of this traumatic experience from my mine and requested any additional info that could be given to me. Bernadette C. Smetka, a social worked with the Seattle office, sent me the following letter, written August 31:
I checked your file and leaned that you came to Seattle to have your baby. Catholic Charities placed you with a family from June 10 until August 14.  Then you stayed at Villa Maria Home for Unwed Mothers near providence Hospital until you entered the hospital to have your baby.  Your son was born September 6, 1962 at 7 p.m.  He weighed 9 lbs. 3 ounces and was 20 inches long.  He was a fine, healthy baby and was placed for adoption at your request.  I cannot give you any information about his family because all adoption records are sealed by court order.  (signed) Bernadette C. Smetks, social worker.

1990. I learned that the Inernational Soundex Reunion Registry would take information submitted by a birth parent and match it to information for a birth child, ONLY IF BOTH PARTIES freely submitted their information.  Since Jim had not submitted his birth information, a match could not be made at that time, but this agency informed me that I could apply for a non certified copy of the birth certificate according to a Washington State law, effective June 7th, 1990,
Senate bill 6493, section 2, line 35, as follows:
Department of health shall provide a non-certified copy of the original birth certificate to the child’s birth parent.  When I received this document, it said:
This is an original record from a sealed file as requested by court order. This is not the legal birth certificate currently on file for this person.  Added confidential information will not be made available to the public for inspection.
According to this document, Boy Borman was white, delivered at forty weeks, mother's age was 20 and, most devastatingly, the box after the word “legitimate” was marked ‘no’.

1998:  I Contacted Washington Adoption Reunion Movement (WARM), an agency that assigns a trained intermediary to search records and facilitate a reunion, if both parties are willing.

1990: Ten months after initiating the search, I was becoming discouraged and desperate.    I decided to fast and pray for three days leading up to Pentecost Sunday, the day that celebrates the Holy Spirit coming upon the disciples.  “Father God,” I prayed, “I too wish to have a gift on Pentecost; please return my son to me.” When I came home from Mass there was a message on my phone answering machine with the words I had been longing to hear for so long: “We have found your son and he is willing to have contact with you.”
to be continued...

My Son, the Godsend, part 2

During my senior year of college, I fell in love with a classmate and spent many happy hours with him, explored the northwest trails, camping, cycling, sailing,  clam digging.  When our relationship became sexually intimate (my first!) I expected marriage would be the next step.  When he abruptly announced that he wanted to “explore the world” before settling down, I was devastated and confused.  He told me he would write to me and seemed to expect that we would pick up our relationship upon his return, but I felt  disheartened and abandoned.
One day soon after he left for Europe, as my roommate and I cycled along Chuckanut Drive, on our way from our college campus to  Larrabee State Park, a car drove by and two young men whistled and called out to us.  Being proper young girls of the times, we ignored them, but were secretly pleased when they later located us in the park.  As I sat on a rock, looking at the ocean, Max came and sat beside me.  A handsome, blue-eyed blond with an athletic build, Max was a navy pilot stationed at nearby Whidbey Island Naval Air Base. In my vulnerable state, I quickly fell into an intimate relationship with him and before long I found I was pregnant.
I have blanked much of those days from my mind.  As Donna Portuesi, MSW, says in Warm Journeys, Spring, 2000, “ Due to the psychological trauma, amnesia may develop around certain aspects of this experience.”
I dropped out of school, one semester short of graduating, went to Seattle and requested help from Catholic Charities, who placed me as a live-in helper with a young family and then in a Home for Unwed Mothers for the last month of my pregnancy.   I do not remember any details of the birth, except for the brief moment I was allowed to hold my son, a moment forever seared in my mind, one that bring tears to this day.  I don’t remember how long I stayed in the hospital or where I went directly afterwards, though within several days I was on a plane to Wrangell, Alaska, where I had lined up a job teaching second grade on a ‘provisional’ certificate, ironically for a teacher taking a maternity leave.
I can’t remember anything about Max, his home town, his age, his interests, not even his last name.  I’m not sure, but I don’t think I even told him about the pregnancy.  If I did tell him, I believe I may have buried the memory of a second rejection coming so soon on the heels of the first.  I choose to believe, and I think it is true, that I simply didn’t tell him because I didn’t love him and had no desire to marry him.  In fact, I did not tell anyone, not my parents, my siblings, my friends.  Needless to say, this was the loneliest time of my life.
My son was born on September 6, 1962.  To my everlasting regret and shame, I relinquished him the following day.
Words do not often fail me, but they fail me here.   There is no way to describe the pain, confusion and loss I felt.

My Son, the Godsend, Part 1

This is the story of a woman who gave up her child for adoption in 1962, when 'having a child out of wedlock' was viewed much more differently than it is today.  After longing all of her life to find him, she was ultimately re-united with him and his family.  I am that woman and I have decided to start this story in the middle and work backwards as I post each day...  then forward to the triumphant day when I first met him!

My Lost Son
My son, the unknown own,
My secret, my sin
My heart now desires
To hold you in.
For years I have suffered
Immeasurable pain,
How I could leave you
I can’t explain.
It seemed I has no say,
No will;
I unknowingly swallowed
The bitterest pill.
I’ve grieved so intensely
For your lost touch,
The sorrow I bear
Is almost too much
Great grief overwhelms me
And as I weep,
I pray the Lord,
Our souls to keep.

Posted by Unknown at 7:59 AM No comments: