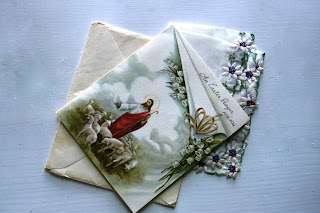 DEATH OF A TEACHER
by Judy Borman Harding, July 8, 201

“She lost a breast, you know.”

Of all the comments I heard my mother make as she sat sipping coffee with the neighbors, these were the most shocking.
In my twelve year old mind, I could not imagine how someone could “lose” a breast.  I remember pondering this for several days, even dreaming of a woman whose breast suddenly dropped from her body and flew away, as she looked frantically about for it.
When I finally asked my mother about this, her explanation was almost as horrifying.  The ‘C‘ word was rarely spoken out loud in those days, so in whispered tones, she told me that her friend had had Cancer and had to have her breasts surgically removed to prevent its spread.  The idea that someone would have her breast cut off, even to save her life, was stunning to me.  I started looking at people I met in a new light, wondering if they were missing any body parts, and I often examined my own budding breasts, wondering if I would someday lose one of them.
Other than the death of my dog, Omar, I hadn’t experienced any other deaths or serious illnesses among my family and acquaintances, so the idea of Cancer began to loom large, filling my head with morbid fantasies.
So when my sixth grade teacher, Sister Mary Jane, became ill and we were told that her illness was serious, I assumed, correctly, that she had cancer.   We students weren’t told the nature of her illness, and I only had my suspicions confirmed by overhearing a hushed conversation between two parents.
Sister Mary Jane’s death marked a rite of passage for me.  It was the first death of a close person I had experienced and I was extremely impacted by her passing, so much so that one day, perhaps forty years after the fact, I was swimming laps in a pool and for some reason began to think of her.  I was alone in the pool and I was suddenly beset with great wracking sobs, which sounded to me, underwater, like some ancient keening ritual.  There was something immensely cleansing and cathartic about those sobs. I realized that I had carried an unresolved grief all of those years and I was able, in some way, to release a pain I hadn’t even realized I carried with me.
As I write about the death of Sister Mary Jane, I realize I received some life empowering blessings directly related to her death:
1.  I learned that death, even of a loved one, is ultimately bearable.
2.  I learned that emotions may take many years to be resolved and may sometimes leap on us unexpectedly.
3.  I learned that good things may come out of the most hurtful situations.  In this case, the substitute teacher, Mary Mura, who filled in for Sister for the rest of the school year, became my all-time favorite teacher and a mentor throughout my school years.
4.   I learned the power of consoling words.  At Mrs. Mura’s suggestion, (the first person, besides my mother,  who actively encourage, my writing talent), I wrote a poem about Sister Mary Jane, which was published in the school newsletter and sent to her biological relatives, who sent me a beautiful handkerchief and a card I still treasure, with the words:
Easter, 1955
Dear Judy,
It was very sweet of you to remember Sister Mary Jane in your school magazine.  I feel sure that Sr. Mary Jane is also remembering you in a special way.  We also want to wish you a Blessed and most Happy Easter
Very Sincerely Yours, Sr. Mary Jane’s sister, Nettie
5.  I learned the value of thank you cards, handwritten.

Death of a pet, part four

Detour drowned in our swimming pool.
There is no other way to say it. The bald facts are that my beloved, innocent little doggie  jumped or fell into the pool.
After my  principal told me I couldn’t bring Detour to school anymore, I started leaving him home with our older Lab, Batman, during the day. Shea Middle school was only blocks away from my home, so I often went home for lunch and one day, when I arranged to meet my hubby there, I got the shock of my life.
When Art and the dogs weren’t in the house, I went outside searching for them and saw that Art was using the pool scoop.  At first I thought he was cleaning out leaves, but then I noticed the grief on his face and I realized he was fishing Detour’s inert body out of the pool.  Art laid him on the grass and he and I and Batman stood around him in stunned silence.  Art and I fell into each others and arms and sobbed.
Since I was due back at school, I tried to contain my grief.  Once I got back to school, however, after leaving Art to deal with the situation, I could not hold it together and as my students began filing in, I burst out screaming and crying and I just couldn’t stop.  When I managed to tell them what had happened, they all began to cry too and someone went to get help from  the prinicpal.  She found a substitute to take my class and I went to an empty classroom, thinking I would be able to calm down and return to work the following period, but I just could not stop crying.  After school, students kept pouring into the classroom giving me hugs and condolences and some stayed with me until I was in shape to drive home.
The healing process after this loss was very slow.  I thought a lot about Detour’s brief and shining life and once I realized he had done more in the year he had existed that most dogs do in their entire life, I was somewhat consoled. His effervescent little self was indelibly printed on the minds of so many students and he had lit up the lives of several people he had visited in care homes for the elderly. He had also given our family, including  Batman, much joy.
Here is one of of my favorite humans, my Mom and my favorite pet: 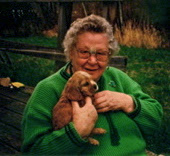 I conclude by sharing  WHAT I LEARNED FROM THIS EXPERIENCE:
Posted by Unknown at 1:41 PM No comments: